Assisting student learning inside and out of the classroom 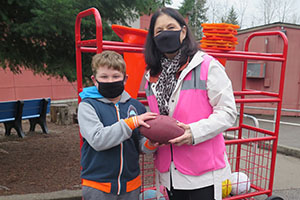 High-Rise Engineer, Official Runner and Tub Marines are a few of the jobs Sue Sporrong “hires” interested students to do at Little Cedars Elementary.

Her jobs program - the Wolverine Workers - helps children learn about being part of a community and the value of teamwork. High-Rise Engineers are responsible for retiring the American flag each afternoon. An Official Runner carries important communication from the school office to classrooms, and Tub Marines ensure lunch boxes return to their owners’ classroom after the midday meal.

“I treat this just like a business owner would for any job,” Sporrong explained. Students learn life skills as they complete applications, undergo interviews and after being hired, spend time training for their duties.

Learning assistants like Sporrong help provide individualized instruction and support to students. They support academic, emotional and social learning. Snohomish schools have about double the number of learning assistants that state funding alone would provide. Dollars from the local Educational Programs and Operations Replacement Levy fund the additional staff, as well as a number of other caring adults needed to provide a full and rich learning experience in safe and secure schools for Snohomish School District’s almost 9,300 students.

Connections between learning assistants and students vary. For some it is helping students safely crossing intersections while walking to school. For others it is sitting side-by-side in the classroom with individual students. Learning how to be good citizens and friends on the playground is yet another example of that important relationship.

After 28 years on the job, Sporrong is a firm believer in the power of relationships and experiences the benefits of that belief every day as she supervises recess.

“It’s not just go out there and blow my whistle,” said Sporrong. “I look at the playground as my classroom.”

“Just like all of us, kids need to warm up to new people and get to know them before becoming comfortable,” she explained. “If they don’t, when the hard stuff comes, kids aren’t going to feel confident coming to you for help.”

Sporrong practices restorative justice to ease conflicts. Each side has the opportunity to share their perspective. Amends are made as appropriate. There can also be other consequences depending on the severity of the situation but “students walk out feeling lighter and better overall,” she said of the restorative justice experience. 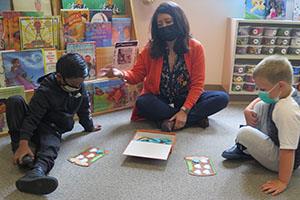 Connie Hellmund feels the same about relationships in her sixth year as a learning assistant in the English Language Learner (ELL) program at Central Primary Center, Emerson Elementary and Snohomish K-6 Remote.

She starts building strong connections as she greets each family as they enroll their children. Often those students have been in the United States for just a few days so their understanding of common terms and directions may be limited. Enrolling in Snohomish schools may be their first time experiencing formal education.

Hellmund grew up in Mexico City. She earned her college degrees in Information Technology and Business. While working at a large bank, she met her husband, originally from Brooklyn, NY, when he came to Mexico to help upgrade the bank’s technology system. They eventually settled in Snohomish where their son grew up.

“When I see those new faces, I see my nieces and nephews,” Hellmund explained. “I understand their issues, fears and hopes. We can identify with each other. Our relationships are priceless.”

She works with small groups and in general education classrooms for individualized instruction as these new students learn English and the culture of American schools. “When you have strong relationships there is more trust,” Hellmund explained. “We want our school to feel like a community no matter what language you speak.”

Her technology skills came in handy when COVID-19 forced learning online in March 2020. While technology was provided to students, for many of her families this was the first computer in the home, Hellmund explained. She helped students set up devices, served as a conduit between internet providers and families, and provided materials to ensure learning continued. 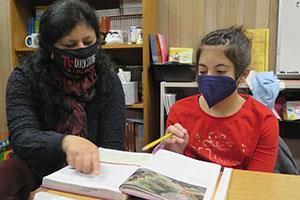 She chose to work in public schools for the past eight years rather than use her degree after volunteering at her neighborhood school when her daughters were young. “I felt this connection to children, and it is so very rewarding to see their successes,” she explained.

Some of those rewards come in tiny, baby steps of individualized progress, Chaudhary explained. Her students struggle in a wide variety of ways. Issues range from controlling their emotions to performing motor skills to grasping an academic concept such as putting together ideas in writing. After trying many techniques and strategies, the task or concept suddenly “clicks.” The resulting smile on her student’s face is her favorite reward. 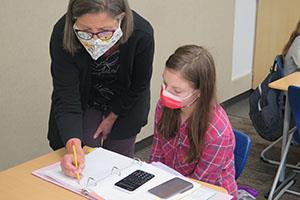 Centennial Middle School’s Julie Wolfe provides individualized support for students wrestling with social and communication issues. “Our goal is to find success however that looks for each student,” Wolfe explained. She is a 17-year veteran of assisting students.

Every student is a unique individual and deserves to be heard, she said indicating that students often produce their own strategies for success. “We start with the scaffolding to support them then little by little we let go until each kid is as on their own as they can be,” she explained.

Trusting relationships ease the process. Centennial’s Connections Program offers students a safe space to express themselves and a team of caring adults willing to listen and support. “I start each day with the thought ‘what can I be for them today so that at the end of the day we can both say today was a good day’,” she said.

A recent “good day” involved taking notes. One of her students strongly resisted taking notes in math class. This impacted their ability to grasp concepts and complete assignments. Rather than turn it into a battle of wills, Wolfe calmly supported the child by taking the notes. After many weeks, this student just picked up a pencil and began writing down key math concepts. “So many things like that fill our tank every day,” she explained. “We see what it took for them to get that far.”

Many learning assistants began supporting students as parent volunteers when their own children were young. “Part of the reason I pursued this career was to give back to the Snohomish School District where my son could not have had a better experience,” Hellmund said. “I hope with my help and the help of others like me that more and more kids get to experience what he did.”